Walk In The Woods pre-screening in Midtown Atlanta last night with Ken “The Weasel” Knight.

No VIP passes for us but thankfully we did get seats. And Amy Knight earned them after her work on the Konnarock crew doing Appalachian Trail work for a week this (and last) summer in Virginia. Those are the real heroes of the A.T. – the volunteers that build and manage it.

The movie is in theaters Labor Day weekend – based on the book by Bill Bryson. Ken/I are in the first 20 minutes, and the lesson here is that you can spend 20 hours on set as an extra and get 4.6 seconds of screen time – if you are lucky.

So watch for us in the “deep background” and don’t quit your day job!

My back end made the Walk In The Woods movie trailer – minute 131 – wonder if that’s what 20 hours of filming as an extra gets you?  A great experience nonetheless – movie is out this Labor Day weekend….

In Episode 26 of the N2Backpacking podcast series, I speak with Director Clint Ross who is hard at work with Producer Paula O'Neal on the film adaptation of the book Blind Courage, which is based on the 1990 Appalachian Trail thru-hike of Bill Irwin – the first legally blind hiker to complete the entire Trail within a single year.

In the show, Clint discusses the first draft of the screenplay, the trailer, and the upcoming plans to film the movie.  He also give us some personal insight in to Bill Irwin and how he overcame alcohol and tobacco addiction through faith in God and by heeding the call to hike the A.T.

Walk In The Woods premiered at the Sundance Film Festival this week to mixed reviews.  Here's a sampling… 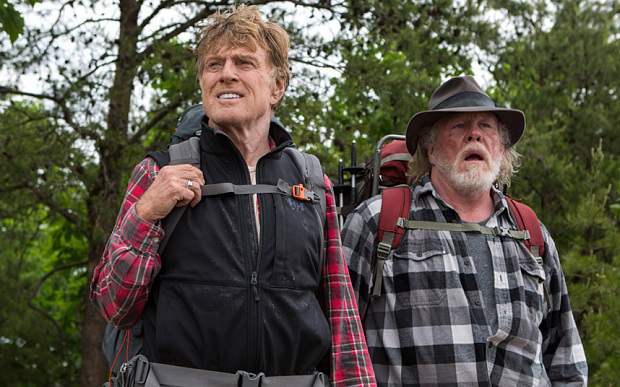 “Plenty of silly little incidents ensue along the way, with lots of jokes about advancing years. Most of these episodes are far too low-stakes to carry a movie and the bigger picture, about two men past their prime trying to figure out what to do in their dotage, is handled far too simply to have real impact. The result is something that is just fine. It’s pleasant enough to watch, but by no means riveting or revolutionary.”

“A delightful journey with fine star turns by Redford and Nolte that should prove a good draw for finicky older audiences.”

“Tame gags are about all the film has to offer. Major distributors were in attendance at the premiere; the chief of one of them left halfway through.”

“I fear the adaptation of the book that premiered at Sundance could destroy future sales of Bryson's travel cult classic—and could put the uninitiated off the AT itself.”

“If you're going on a journey, it's good to have familiar traveling companions — which is why “A Walk in the Woods” is a trip worth taking.”

It’s pleasant enough cinematic comfort food, but even so, you may be hungry again soon afterward.”

#N2Backpacking welcomes fellow podcasters Scott and Ariane to the show to talk about backcountry guiding, #TrustTheTrail, and their life on the road. Episode #86 is here .. http://ow.ly/H4sk50EfzlW

The #N2Backpacking podcast is now on the big screen!!!

3W looking happy in his hammock on the #BentonMacKayeTrail