Dropped him off on the #AppalachianTrail earlier this spring. 3W has officially made it to the halfway point. Congrats! #thruhiker #at2017 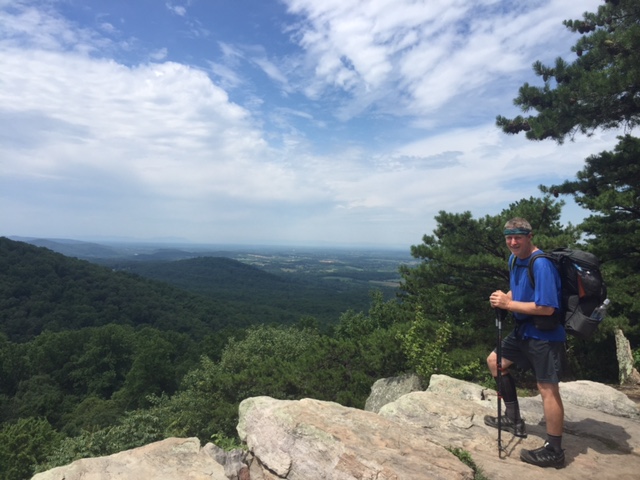 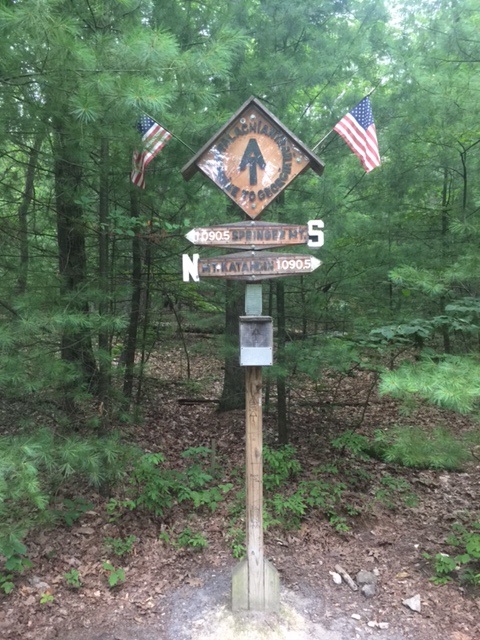 A #thruhiker friend just shared this cool pic of an #AppalachianTrail marker from a recent #backpacking trip. 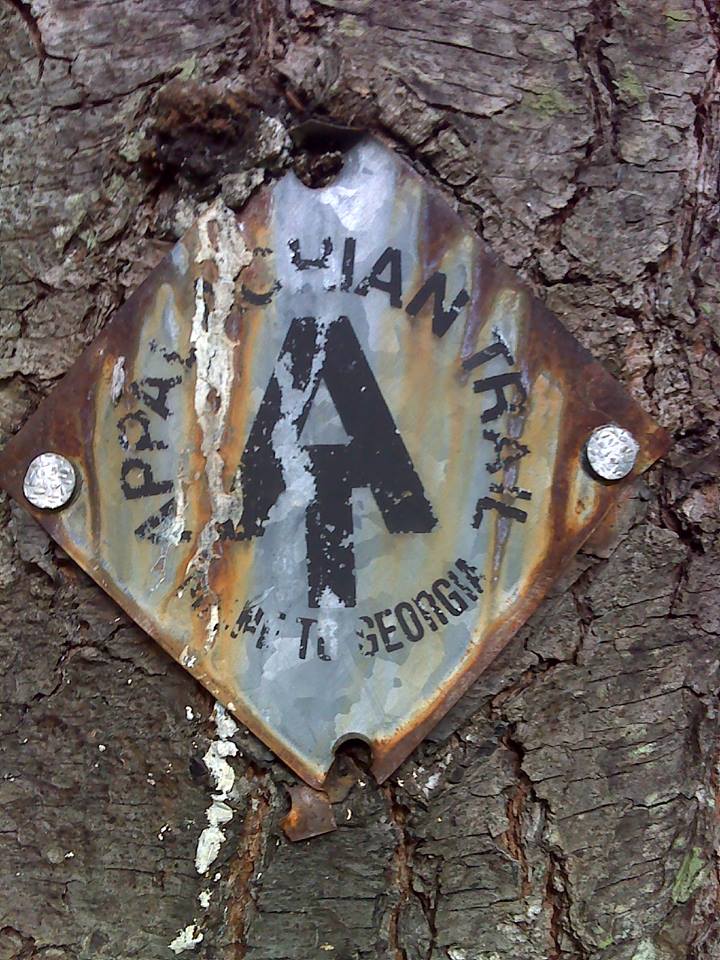 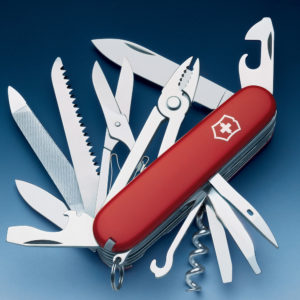 In Episode 42, we discuss a March 2017 article that appeared in Outside Magazine titled “The 40 Most Significant Tools & Toys Ever Designed”.  In honor of the magazine's 40th anniversary, the editors choose 40 products that “stood out for their sheer inventiveness” and their general impact on the outdoor community.

Tonight we sit fireside on the South Carolina side of the Chattooga River and debate the merits of some items on the list.  Our group rarely reaches a consensus on each product – which makes for an entertaining show and guarantees that we'll do a follow-up episode in the future to expand on the list.

So listen in and tell us what gear Outside missed.  And while you are at it … enjoy the fire cracking in the foreground and the Chattooga River flowing in the background as we talk about the Most Significant Backcountry Gear Of All Time!

Subject: Most Significant Backcountry Gear Of All Time?

I have a friend hiking the Appalachian Trail this year and his schedule (and some inclement weather) had him take a zero day in Gatlinburg, TN which gave us an opportunity to catch up with him last weekend.  Here is the World Wide Wanderer (aka 3W) relaxing on the balcony of the LeConte View Motel. 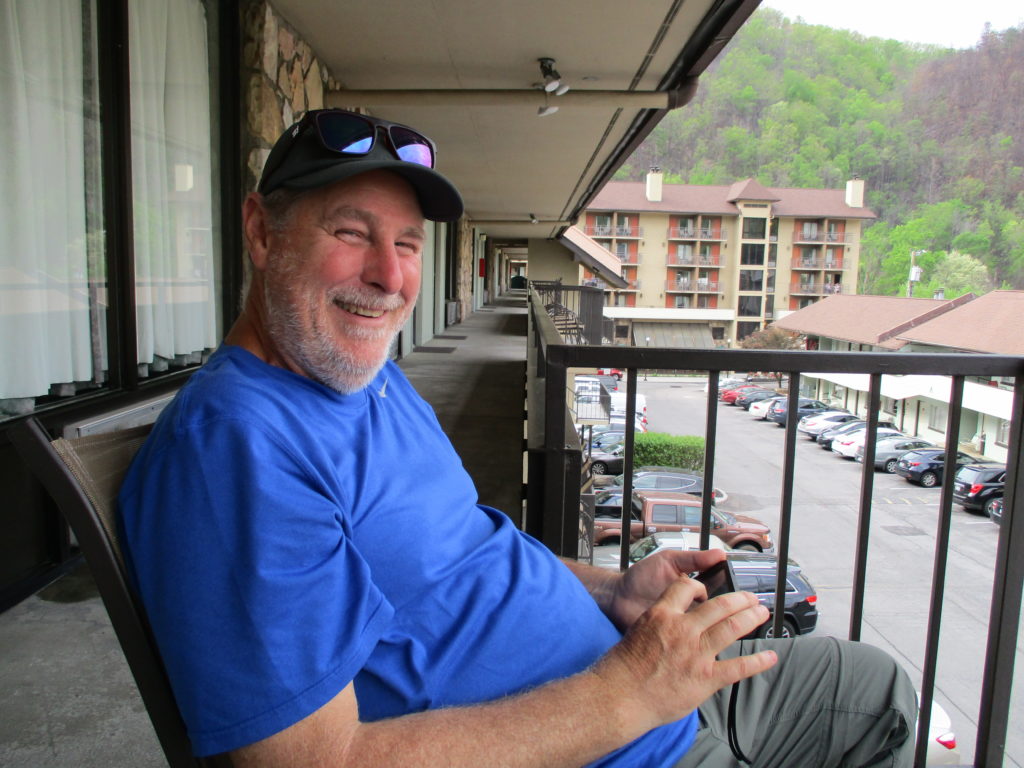 He shared some photos and video from the Trail and detailed his first three weeks on the A.T.  We absorbed it like a sponge, then offered to buy him dinner – a gesture that no thru-hiker would refuse (and he didn't). 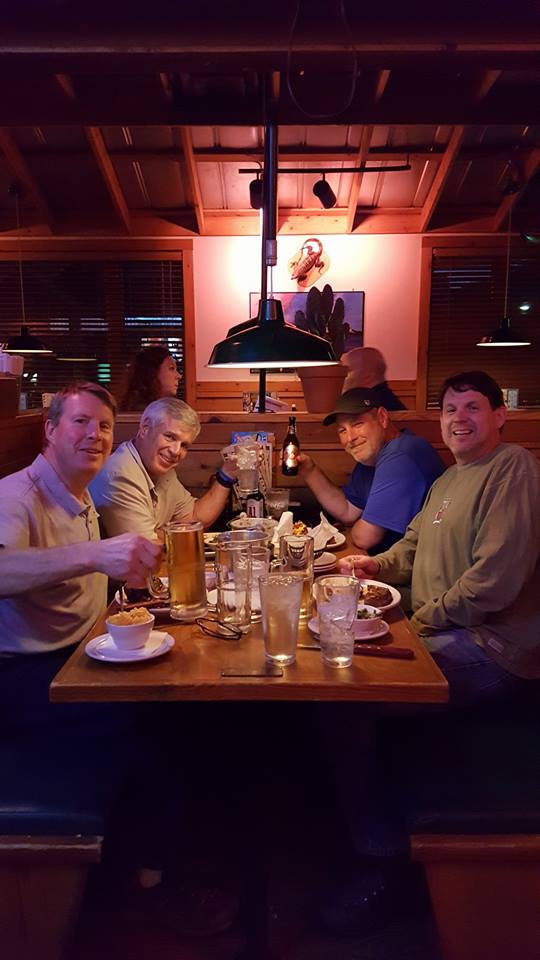 Then we headed out to walk the streets of Gatlingburg.  Any thru-hiker will tell you that the town is culture shock after hiking in the backcountry.  Plus … there was a conference in town this weekend – which meant the streets were packed with people. 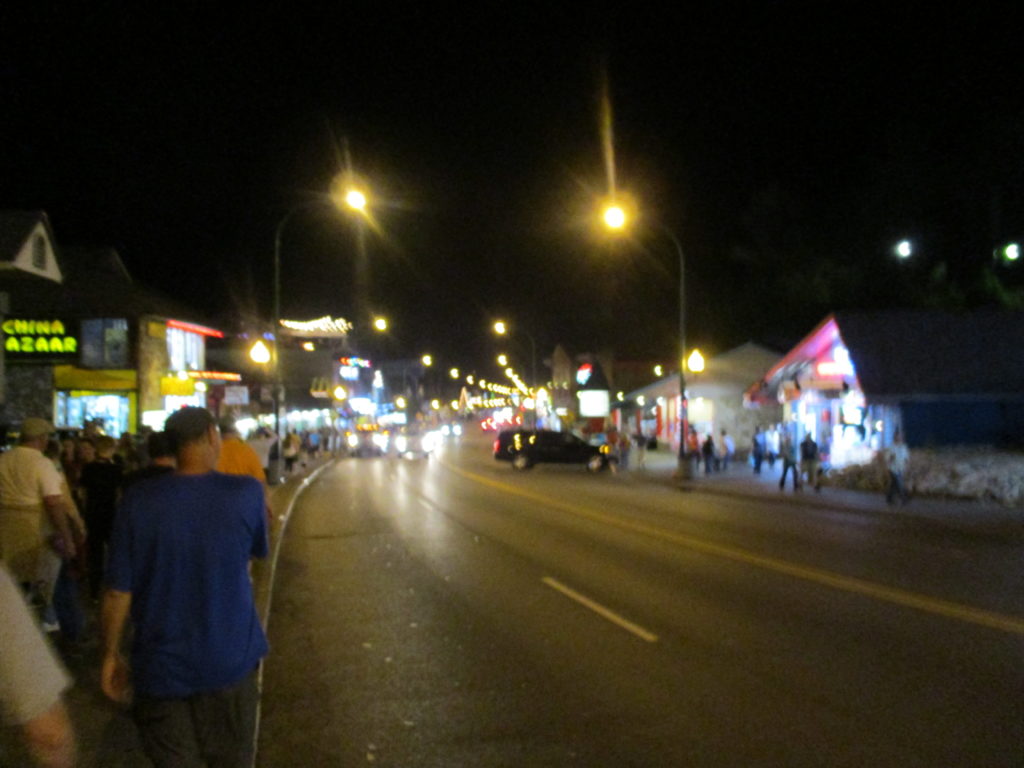 But the road was not.  There was a 10K scheduled to start at 10pm, and the roads were nearly empty.  So we headed to the balcony of a Mexican restaurant to watch the run.  But then … the rains came 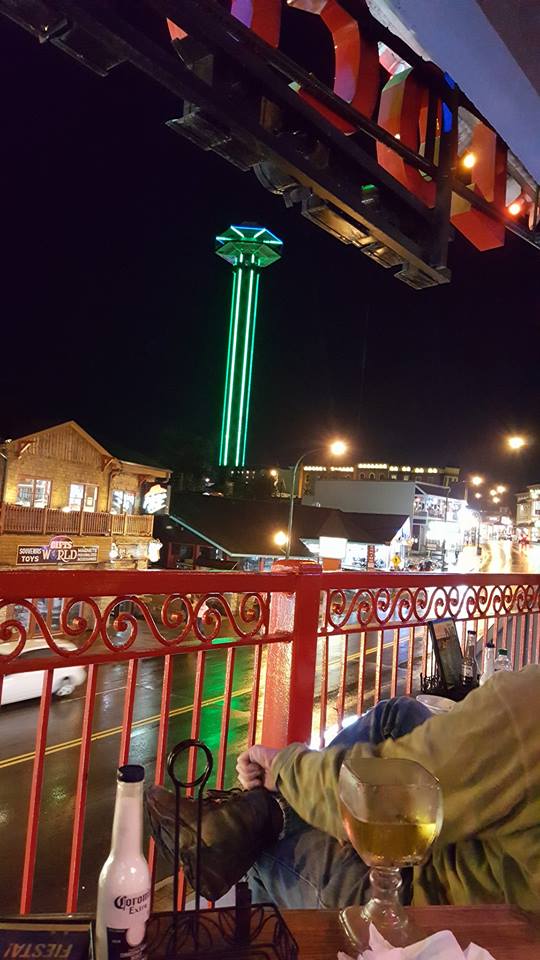 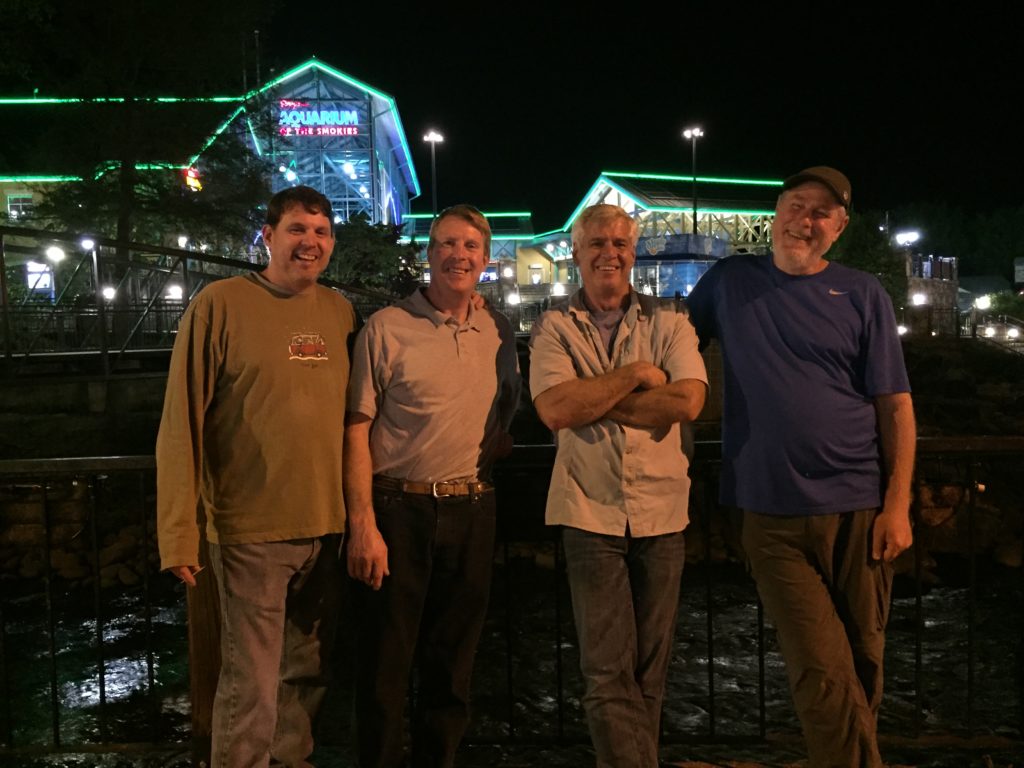 Oddly, the Chattooga River near Mountain Rest, S.C. had avoided most of the storms and it was sunny when we arrived – just as the weatherman predicted. 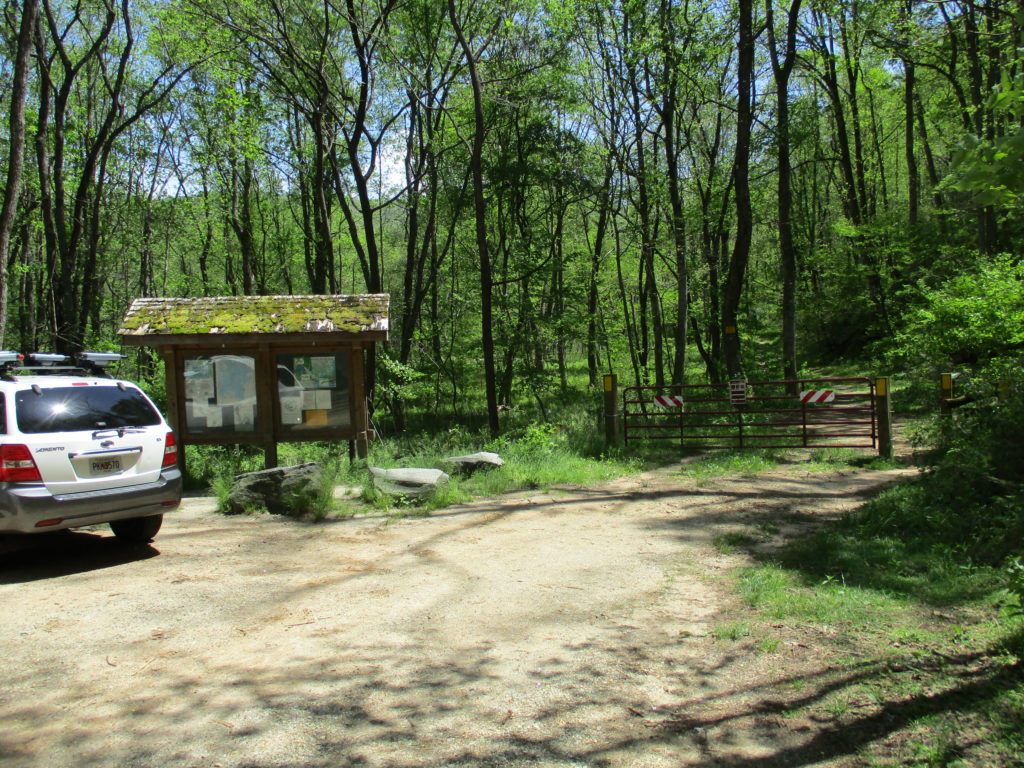 So we shouldered our packs and hit the Chattooga River Trail – hiking upstream and northbound to a campsite that the Camel and I last visited in 2001. 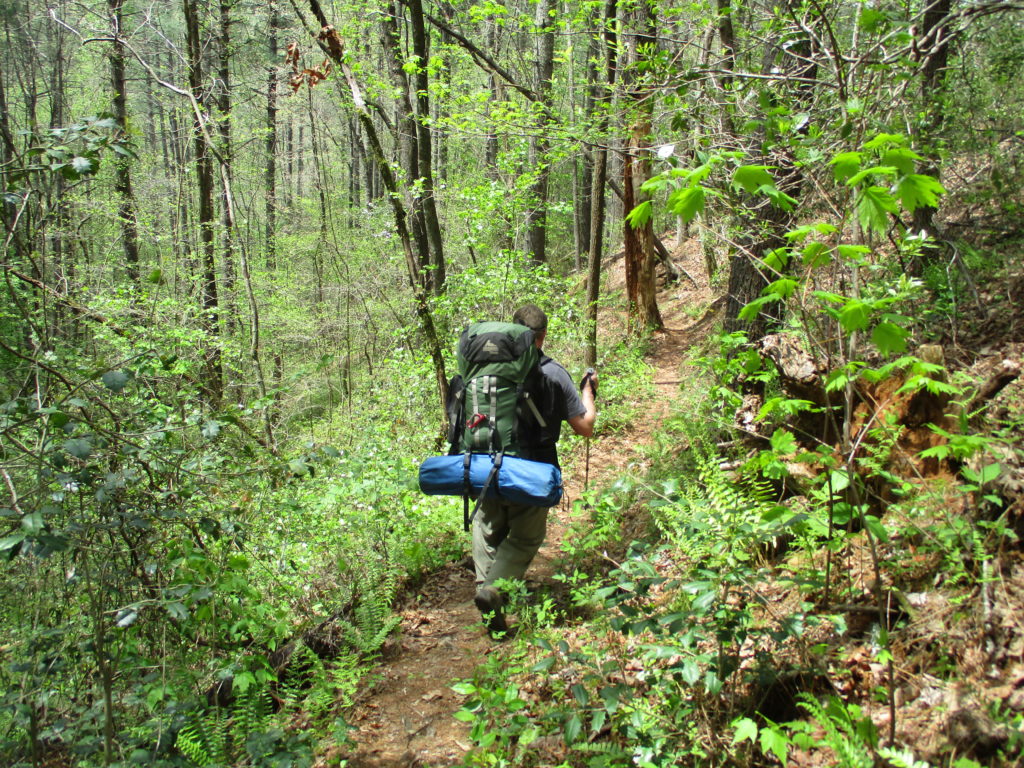 After backpacking two hours, we found a nice site on the river.  It wasn't the one we were shooting for, but was worthy enough.  Unfortunately, I didn't have my fishing pole because there is some great water here for trout. 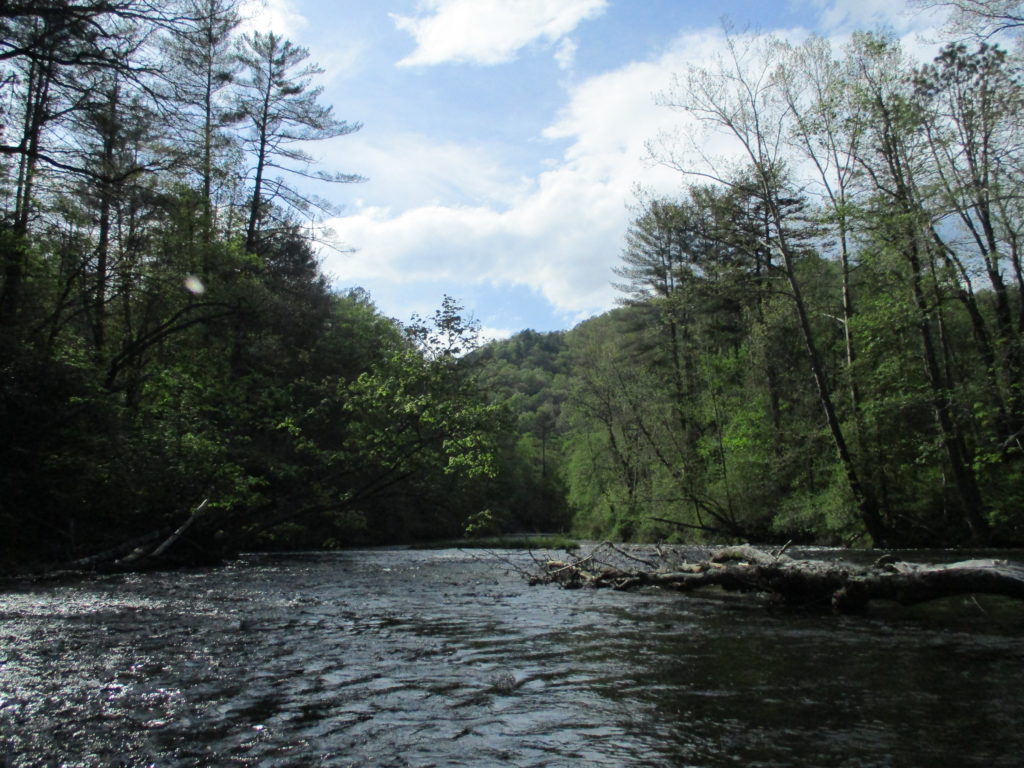 But the rains that plagued the thru-hikers in the Smokies did eventually find us.  The storm started at 9pm and continued through the afternoon on Sunday.  Good thing we had the Kelty tarp pitched tonight to give us a place to hang out. 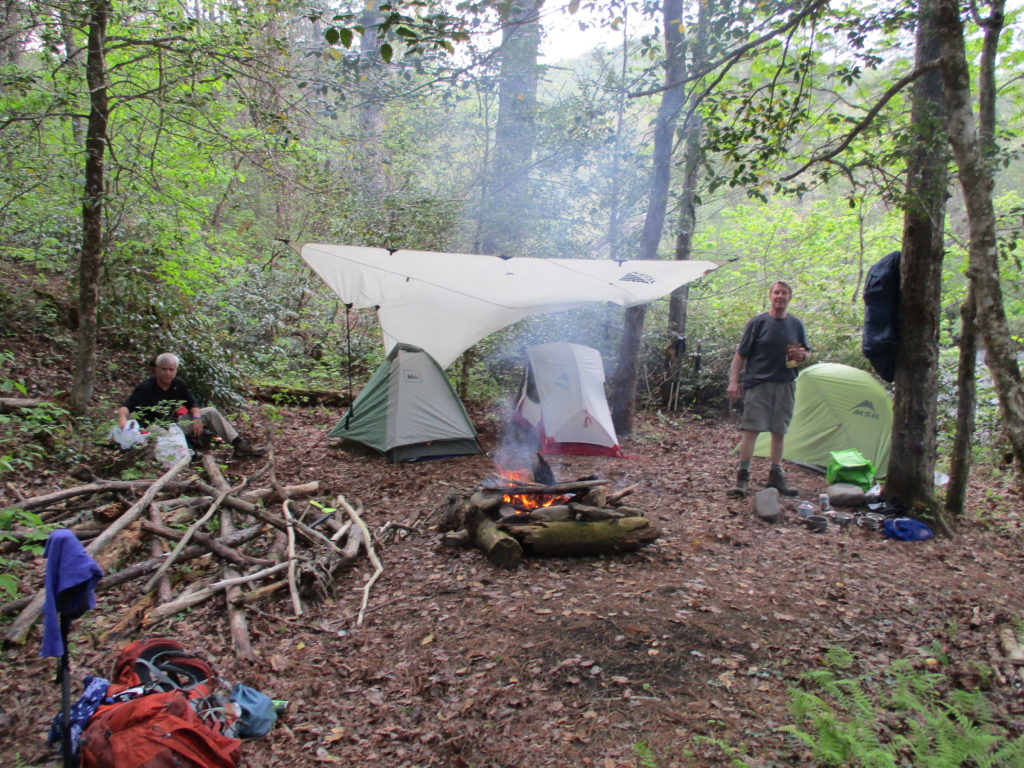 Yet we salvaged the trip and had a chance to serve some Trail Magic to a buddy in the process.  So a successful venture in my book.  Go 3W Go!  Here he is at Amicalola Falls State Park to start his thru-hike on March 26th. 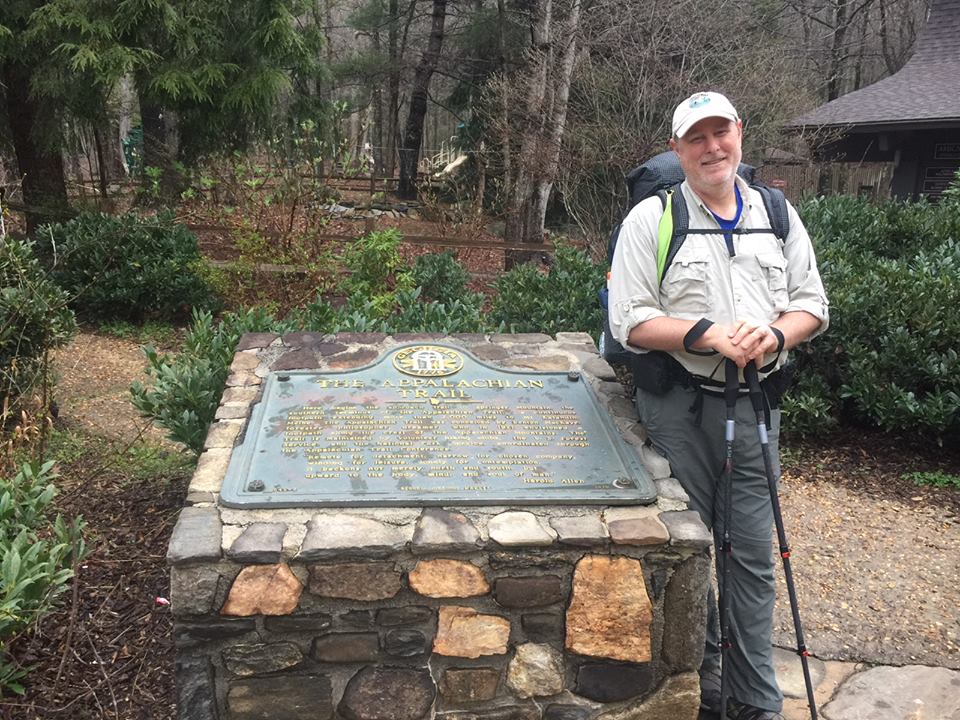 In Episode 30, we welcome Scott “Squatch” Herriott back to the show to discuss his film Wayfaring and his jaunt along the Camino de Santiago (or Way of St. James).  The trail starts in France and ends near the coast of Spain and was one of the most important Christian pilgrimages during the Middle Ages.

Starting in 1985, modern day hikers have increasingly followed the path – with over 200,000 “pilgrims” hiking the route each of the last few years.  In the podcast, Squatch talks about his adventures on the ~518 mile trail and offers up some suggestions for prospective thru-hikers.

For more information on Squatch and his films, click here!  And watch out for his latest release,  72 Days In Iceland, which will be available for streaming (and on DVD) this February.  In the last ten minutes of the show, Squatch provides a preview and also hints at his next great adventure.  Click below for the audio interview. 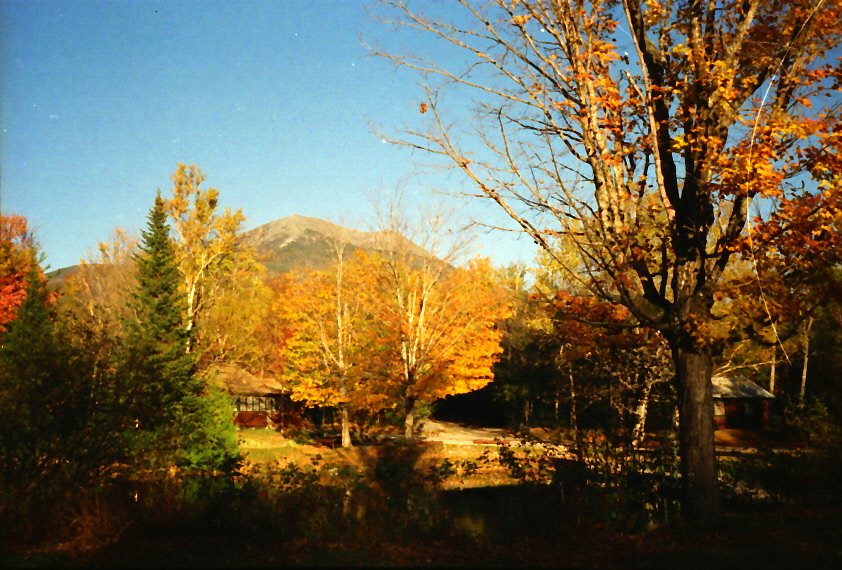 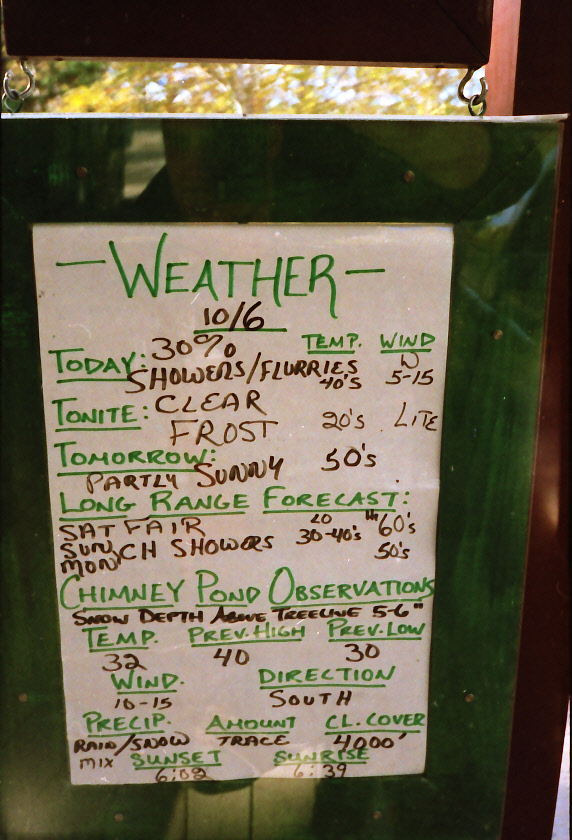 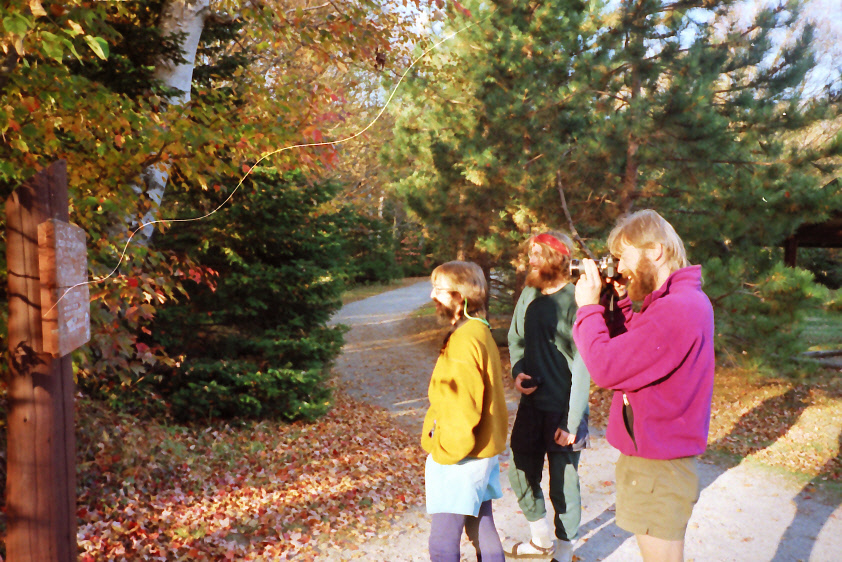 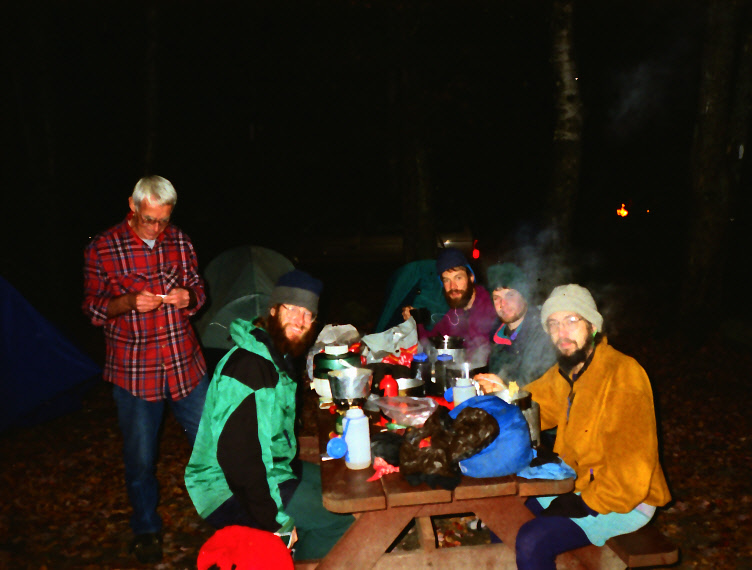 In the mid-90′, Dana Design was the backpack for thru-hikers on the Appalachian Trail.  I liked mine so much that I bought a second one two years after my thru-hike despite the steep price of $400+ 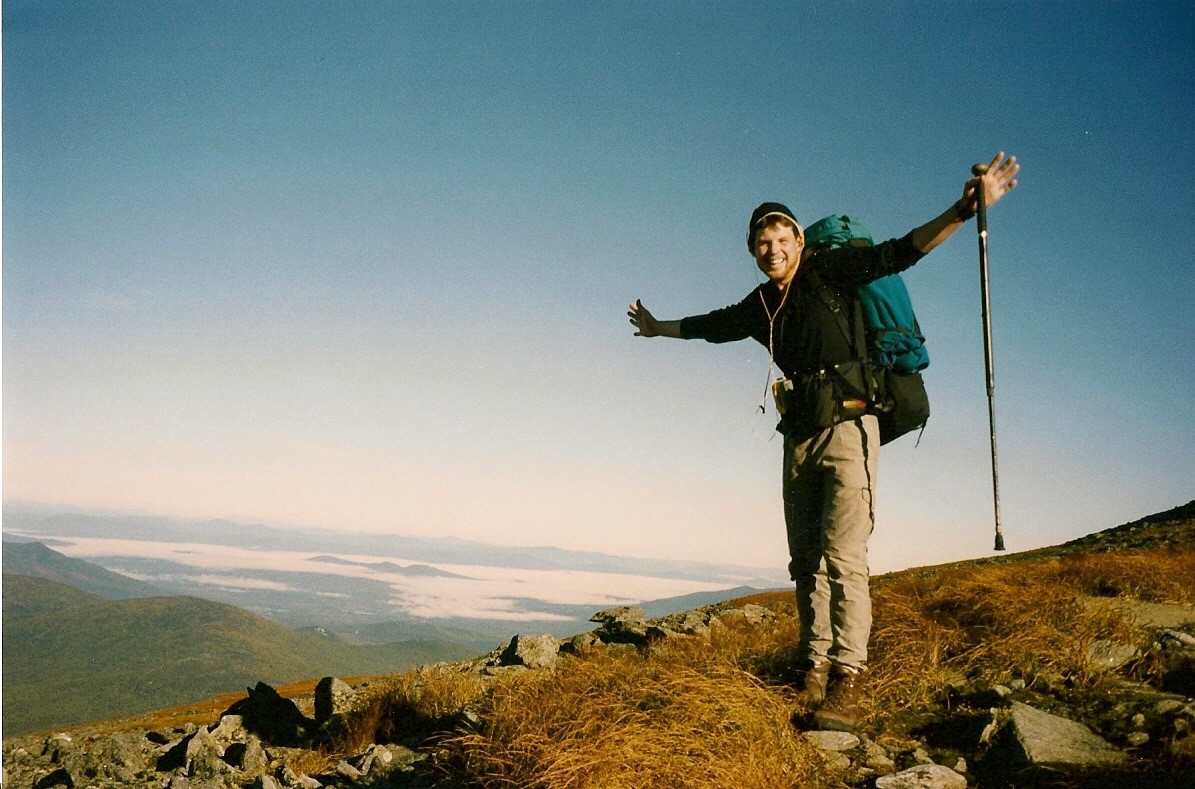 And Dana Gleason, founder of his namesake Dana Designs, has returned to the market!  After selling his company and watching a series of outdoor companies fumble with a once dominant brand – Dana is back (and so is the Terraplane). 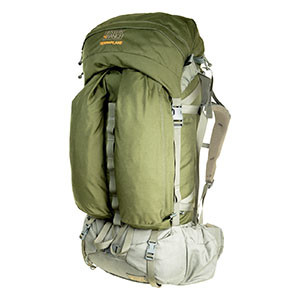 The U.S. Military and U.S. Forest Service “hot shot” fire-fighting crews have been the beneficiary of Dana’s skills over the last few years – but the packs are once again available to the public.  There is a great article about this at GearJunkie.com, and hopefully I can land a N2Backpacking podcast with Dana in the future.  That’s how passionate I am about both my Dana backpacks – which after 20+ years I still use to this day! 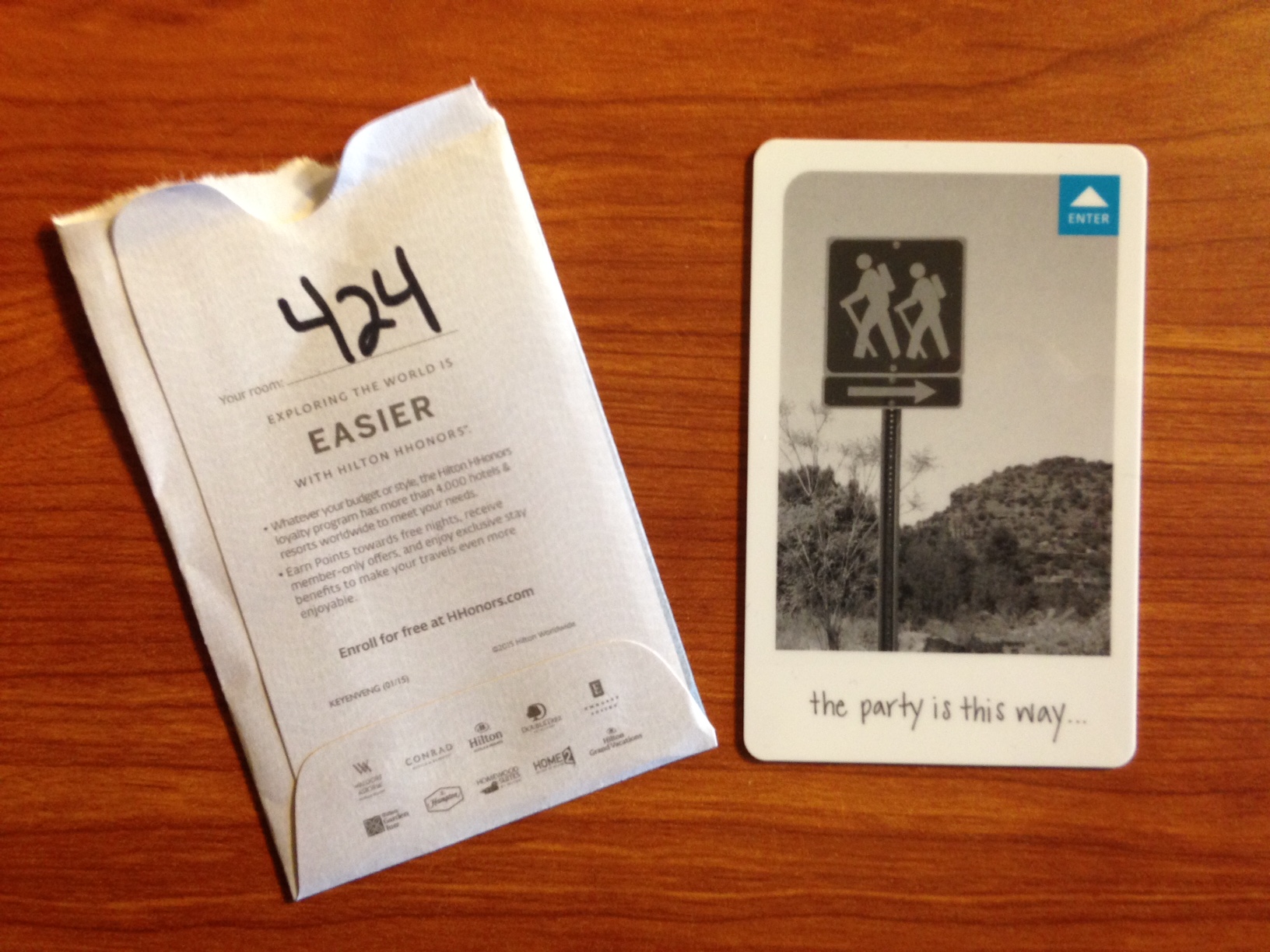 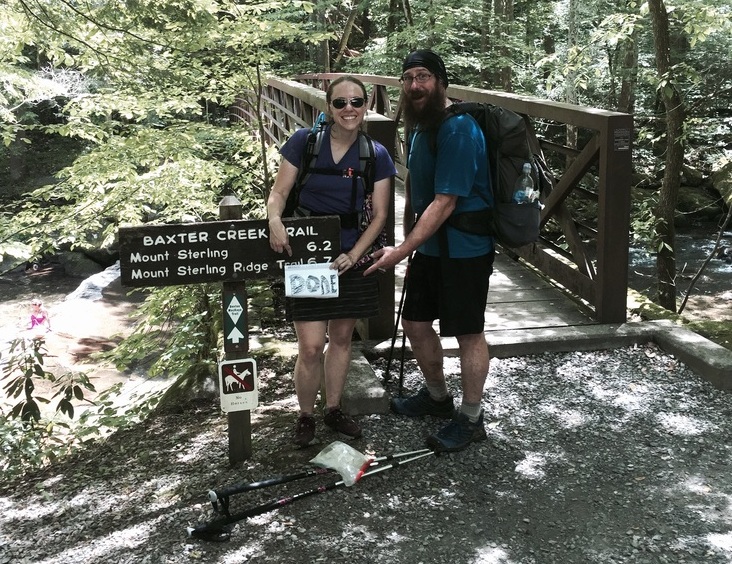 In Episode 28, Sprinkles and NoKey tell us about their ultimate thru-hiking summer – walking 1400 miles on four major trails on the East Coast – including the Benton MacKaye, Finger Lakes, Northville-Placid and Long Trails.

Forewarning, we spend the majority of the podcast discussing their 20 day, ~290 mile hike on the Benton MacKaye Trail – a great alternative to the Appalachian Trail in the South – but there's lots of great tips on backpacking and thru-hiking in general.

So listen in – and when the mobs of thru-hikers hit the Trail next year after the movies Wild and Walk In The Woods motivate the masses… you now have some great alternatives to the A.T. and P.C.T.!

Follow Sprinkles and NoKey here.  Or click this link to learn more about the Benton MacKaye Trail.

My back end made the Walk In The Woods movie trailer – minute 131 – wonder if that’s what 20 hours of filming as an extra gets you?  A great experience nonetheless – movie is out this Labor Day weekend….

Here’s a link to more photos and details of  the Camel’s Birthday backpacking trip in the Jefferson National Forest. Awesome time! https://ift.tt/3nFCM4L

The coffee mug says it all… Cheers to my favorite peasant!!!

Our campsite this weekend in the Jefferson National Forest of Virginia. Lots of wild ponies roaming nearby.

After our 1994 #appalachiantrail #thruhike, Troubadour wrote a few newsletters titled “Beyond Katahdin” so we could all keep in touch. This was a top ten list written by Jester who hiked with us. Still makes me laugh…